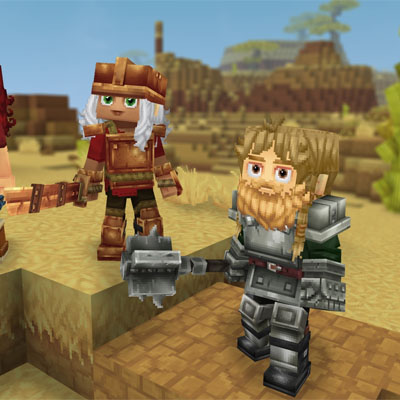 
Hytale from Derry-based Hypixel Studios has been nominated in the Most Wanted Game category at the 37th Golden Joystick Awards. These are the world’s longest-running public-voted games awards and hold a special place in the gaming calendar.

Hytale is a blockgame built around three pillars: going on adventures in a procedurally-generated fantasy world, playing minigames with the community, and building and sharing mods and custom content using an accessible set of browser-based and in-game tools.

The Most Wanted Game category is all about the future: the games the public is most looking forward to in the coming years. Hytale is one of twelve games shortlisted in this category with Awards organisers commenting:

It’s unlikely we’ll ever get a Minecraft 2 in name, but Hytale is essentially that in nature. “The scope of a sandbox with the depth of an RPG”, Hytale has the familiar blocky aesthetic with so much freedom, the possibilities will be endless.

You can vote for Hytale here: https://www.gamesradar.com/goldenjoystickawards/#most-wanted-game

The Golden Joystick Awards take place in London’s Bloomsbury Big Top on 15th November and are hosted by comedian and Assassin’s Creed star Danny Wallace. The event will be livestreamed and viewers will get to enjoy the ceremony as well as interviews, trailers and more.