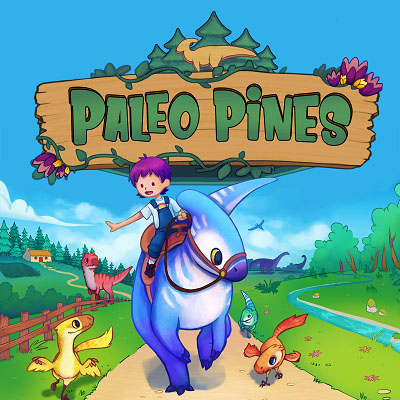 Paleo Pines is a casual social/management sim where players can become dinosaur ranchers. In a wholesome, friendly environment, dozens of dinosaur species are befriended, cared for and ridden into the wild to search for more and expand the ranch. The game takes inspiration from the relaxing, nurturing gameplay of titles such as Animal Crossing and Harvest Moon and mixes it with the insanely popular collect-them-all compulsion of Pokémon.

The initial idea for Paleo Pines was first conceived at Global Game Jam back in January of this year by Jordan Bradley, concept artist at Holywood indie studio Italic Pig: “I was tired of dinosaurs always being portrayed in film as ‘monsters’. I thought, surely I can’t be the only one who just wants to pet one on the nose!”

As it turns out, she was right.

Jordan posted several of her concept drawings on Twitter, and they instantly gained a tremendous following. The response was immensely positive and the public’s desire to see the idea realised as a full game was overwhelming and impossible to ignore.

Italic Pig’s Creative Director Kevin Beimers immediately saw the appeal in the characters and concepts, as well as how quickly the social media following was growing. He signed Jordan’s game concept as a studio development and began to put studio funds and resources toward more concepts and a playable prototype.

“Everything we do at Italic Pig is a little bit different. It needs a passion behind it, not to mention a quirkiness and a twist on the every day,” added Kevin. “Jordan’s passion for dinosaurs as a life-long paleo artist, combined with the epic flair for storytelling and outrageous local talent of the studio will undoubtedly create something incredible.”

Italic Pig’s previous developments include Schrodinger’s Cat and the Raiders of the Lost Quark, a quantum physics action-adventure game, Mona Lisa, a Renaissance heist and forgery adventure, and The Infinite Hotel, a character-driven VR experience about an elevator operator in a hotel with an infinite number of floors.

In Paleo Pines, players turn neglected meadows into bountiful dinosaur pastures and explore vast worlds. Players can tame and care for their new friends, befriend townsfolk, plant gardens, and encounter amazing creatures. Far from movie monsters, the dinosaurs in the game are adorably-stylised versions of real dinosaur species, and all of them are pettable, ridable, and lovable, which seems to be exactly what the social media audience is crying out for.

It was this public interest that drew UK based game publisher The Irregular Corporation to get involved.

“When we saw Jordan’s dinosaur designs show up in our Twitter feed, we saw an amazing hit was on the horizon,” said Stuart Morton, Publishing Director of the Irregular Corporation. “We knew we had to be first to the table with an offer if we wanted to be a part of a potentially huge new property.”

The Irregular Corporation, a publishing sister-company of international game developer Mediatonic, has seen huge success in recent years through partnering with indie studios. Most recently, they have focused their portfolio on the Simulation genre, including the very popular PC Building Simulator and Good Company, a tycoon simulator.

The majority of the development for Paleo Pines will take place in Northern Ireland at Italic Pig studios in Holywood, County Down. Italic Pig has ramped up its team to more than double the size to recruit new 3D artists, riggers and programmers from throughout the UK, bringing them to Northern Ireland for the duration of the 18-month production. It is hoped that the team will continue to grow following on from a successful launch expected in 2021.

Richard Williams, CEO at Northern Ireland Screen said: “As the first seven-figure game to be produced locally, Paleo Pines is hugely important to the development of the video games industry in Northern Ireland. It’s a real step up for significant finance and distribution to be attracted to a game and company almost from the start of development. We’re very excited to see what this game can do for both Italic Pig and for the video games industry here generally.”

Within the UK, the gaming industry makes up 50% of entertainment revenue. When coupled with the support provided by Northern Ireland Screen, both financially and to assist in brokering deals with larger publishers, it is a fertile environment for companies such as Italic Pig who have the creative talent and track record to begin to take on larger projects.

“The gaming industry in Northern Ireland has always been small, passionate and collaborative, but the truth is, we’re not so small anymore,” added Kevin, who is also the Chair of Games NI, “Last month we had 175 people turn up to a Belfast games industry meet up, and the community just keeps growing. With Paleo Pines being the largest game deal ever made in the region, we can only hope that the spotlight brings with it the attention and means for more local creators to get their stories told.”