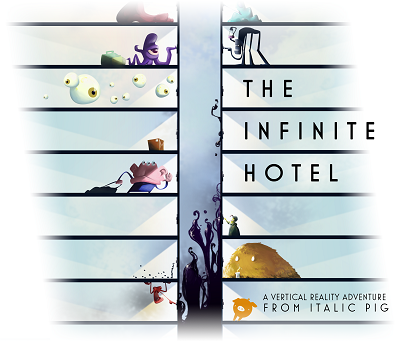 The Infinite Hotel is a character-driven VR adventure that boasts “a grand scale adventure in a room scale space”. Set in a hotel with an infinite number of floors, the player takes on the role of elevator operator to the weird and quirky staff and patrons of the universe’s most luxurious holiday resort.

The first event of the Immersive Summit, an annual symposium of eye-opening talks and panel discussions, shining the spotlight on leading creators and emerging voices from around the world, will take place at Vue Piccadilly Cinema on 26th September between 10:30 – 5:30pm. As part of the Immersive Games Panel, Kevin Beimers will be talking about the creation of The Infinite Hotel and the challenges and opportunities that VR presents for storytellers.

Kevin Beimer, CEO of Italic Pig said: “What interests me in VR is that it hasn’t had its ‘Fruit Ninja’ moment yet. I’m not saying I’m looking for Fruit Ninja VR, but Fruit Ninja as a metaphor representing a new game mechanic that truly embraced and catered to touchscreen mobile. VR is still in its infancy, and as far as I can tell, people are still searching for the new mechanic that is ‘special’ to VR – not a port, not a reskinning, but a unique, purist experience for the medium. As someone who likes to mess with expectations and experimentally mash genres together, it’s the absence of hard rules that excites me most.”

The project originally entered development through the support of both the Creative Europe MEDIA Sub-Programme and Northern Ireland Screen, and has most recently been supported by Future Screens NI and HTC Viveport. Italic Pig is currently looking for adventurous partners to help fund and support the completion of The Infinite Hotel.